The god of this world has appeared unto mankind in many different forms and shapes down through the millennia; as a golden orb, the voice (both inner and outer), an elderly father figure, various gods & goddesses, beasts and creatures, demons and devils, even as an Angel of Light. He has appeared as whatever man wanted to see, expected to see, or needed to see. However his true form is that of a reptile walking on two legs, with a tail, a Lizard.

The Lizard rules over this world of the dead and can materialize as a form or a figure, or even take the human form of one who agrees to loan their physical body. The Lizard is the most powerful angel; he creates and he destroys. He has created this world and this world is totally subject unto him.

He rules and reigns over this world exclusively, proclaiming himself to be the one and only god; "I am the Lord, and there is none else. I form the light, and I create the darkness: I MAKE PEACE, AND CREATE EVIL: I the Lord do all these things." (Isaiah 45:5-7) And as history testifies, he destroys any who fail to obey or worship him; for he is a jealous god.

Yes the Lizard demands loyalty without question, and punishes every violation. No person or group of people can fight against the Lizard because he is too powerful. From the beginning, until now, and on into the future, without exception, regardless of how clever, educated or cunning we may think we are, we are helpless prisoners under the satanic control of the Lizard, unable to escape by any power or wisdom of our own.

The Lizard is connected to each one of us through the soul inside and each soul is an archetype of the Lizard containing witchcraft, wicked sacrifices, murderers of children, devourers of men's flesh, feasts of blood and the phenomena of majick. He gives his followers the image of freedom (arrogance) creating a false sense of superiority, when in fact, there is no freedom as all are controlled by the Lizard's souls of good and evil.

We are the fallen angels. We were cast out of heaven, suddenly, like a flash of lightening, into the bottomless pit, exiled. Here we are doing the same things that got us exiled; most of us unknowingly, some knowingly.

The Lizard gives his power through the soul to those he chooses according to his plan. The world rulers are brought into this world and appointed positions to serve the Lizard. They operate around the world as one organized body, serving the Lizard, engaging in human sacrifice, along with other horrific practices to appease the Lizard, who punishes the unfaithful using the same abominations which are stored in their souls to torment them.

Think not that the Lizard's power is weak, his disciples simple, or his followers few. His is the secret of reincarnation whereby his most loyal followers are returned here, time and time again, into their families of power. Think this sounds far fetched? Read about the Dalai Lama and his ability to do this.

The Lizard slays men, women and children, and even his followers, in sacrifice, using secret ceremonies and reveling in strange rites, the sight thereof enticing fools to lust after the Lizard and his power, performing blood sacrifices all over the planet. As the history books and bibles testify, the Lizard has required blood sacrifice since the beginning of his creation, and it continues today, around the world, in many forms, under the guise of an endless battle between good and evil (whereas good fighting evil is just more evil from a different perspective). Battles rage around the world; murder is promoted using various psychological means; the blood flows and no one is the wiser.

Down through the ages the Lizard has taught his followers some of his secrets of creation, supplying the "Know-How" to make various weapons of destruction and torture, uniting mankind in a never ending battle and blood sacrifice for "God and Country"; a monumental deception.

This is the world of the Lizard and his minion; a counterfeit world created to confuse, conceal, confound, deceive and cause forgetfulness. This world has been designed to deceive even the very elect of the Lizard.

Our minds have been darkened by this veil of forgetfulness, AS Above - So Below. Other Earth is the archetype after which this counterfeit world was created, to breed familiarity; the soul a counterfeit to resemble the soul we had in heaven. And so we are easily and craftily deceived. Being ignorant of the righteousness of the Living God, the soul takes root and produces its fruit of good and evil, ministering unto us to do its bidding, becoming all powerful because we do not recognize it. And so, being ignorant of the soul, it takes root in us and grows in strength, becoming all controlling and we mistake it as being a part of our self, the mind, because the soul's voice is an excellent counterfeit of our mind's voice.

So long as the soul, the root of good and evil remains unknown, the deception works perfectly.

Our essence is not the soul, which was created in the image of the Lizard, but we are the mind that was created in the likeness of the Living God. The battle is not against the evil in this world, it's a personal battle against the soul inside. "If any man will come after me, let him deny himself (his soul) and take up his cross DAILY, and follow me. Take no thought for the morrow for the morrow shall take thought for the things of itself. Sufficient unto the day is the evil thereof." (Luke 9:23 ; Matthew 6:34)

However one can not merely cut at the root, for in doing so it merely sprouts again. One must lay deep the axe, cutting the soul off completely from rising up and controlling us. One's full WILL must be brought to bare against the soul, full of determination, nothing less will do. Resist the evil of the day for the evil of the day is sufficient work for the laborer.

There is a truth and then there is a deceptive image of the truth. Christ is the truth revealed from the Living God to the seeker. The anti-christ is the deception which holds the people in darkness (ignorance).

It is extremely difficult for the average person to see any of these things which actually exist because their minds are being controlled by the dead imagery, the pictures of light and sound stored within their souls. Their minds have become imprisoned by their soul's belief systems and stored knowledge, giving the illusion of free will when it is actually a conditioned will. And so as long as the knowledge of the soul remains hidden from the mind, the deception works perfectly, but when the soul is revealed, the mind begins to slowly awaken and the soul's control begins to weaken.

Therefore awaken your mind to the counterfeit voice, that inner voice, and begin to cast off the works of that evil soul. Everything that holds us in forgetfulness comes from the soul.

Without this knowledge of the soul, and how it operates, we have no hope; and without first-hand personal experience of both, we have only a limited ability to understand the teachings of Jesus.

There is a rebirth that comes from applying, changing and overcoming. Then there is a deceptive false image of rebirth that comes from reading, remembering and talking; it has the belief of being born again, but it's just talk without taking the action of change, and so the person never experiences the truth of the word as can be received through revelation.

The Lizard has taken the truth whenever it has appeared and hidden it, for he cannot enter into heaven and he will not allow those who can to enter. But remember you can judge the written word by this, "the Living God forgives because his love is true". If you do not fast from this world it is impossible to see the things as they actally exist, for we are not contending against flesh and blood but against principalities, powers and great wickedness from the ruler of this world and his minions of wickedness, putting stumbling blocks and snares in the way, deceiving us with superstitions, spirituality, religion and the wickedness of each. The Lizard uses all his skill, power and lying wonders to deceive and lead us astray far into the way of error where we eventually doubt the existence of the Living God and ignore his ways for temporary personal gain.

When a truth is "revealed" it is literally dropped into your mind and you experience an ah-ha realization: and when you experience revelation you marvel in the moment and later exclaim WOW! at the knowledge revealed.

But take heed for as the Light that shines into a dark place, the soul will send its "thought images" into your mind to confound and confuse the revelation. The soul will try and create a deceptive interpretation of the knowledge revealed. Therefore one must learn to judge between the two different experiences; revelation from the Living God, and the interfering thought images from the soul. (There are many truths on this web site which many have read, but their old thought images have blocked their understanding thereof.)

The revelation of salvation comes to the sincere seeker, not the curious or tester of God. If you are ready to leave this counterfeit world of the Lizard, then, "work out your own salvation" by applying these teachings of Jesus. Look at what is inside you creating joy and sorrow, love and hate, good and evil. Our essence is not the soul which was created in the image of the Lizard, but the mind that was created in the likeness of the Living God. Put on the knowledge of the Living God, the Christ, and stand against the tricks, trials, tribulations and wiles of the soul.

If you take the time to carefully investigate your self, you will find these teachings are true; for when you know your self, and the soul inside, then you will be heard and help will be given.

Jesus came with the ability of recollection that he might reveal the Lizard and his creation thereby rebuking our forgetfulness and awakening our minds to the truth; that by entering into this world of the dead, Jesus revealed him that hath the power of death, that is, the Lizard. And Jesus having overcome his soul made a show of it openly thus revealing the grand deception of the Lizard.

Revelations are sent to the seekers such that faith exists, so that a multitude will attain to the truth, and their numbers shall increase in all the lands around the world as a testimony unto the Living God.

In this world the fallen angels serve the Lizard but on Other Earth the angels watch over, protect, and minister unto the seekers, guiding them to this knowledge, "for unto the angels hath the Living God not put in subjection the world to come whereof we speak." (Hebrews 2:5) 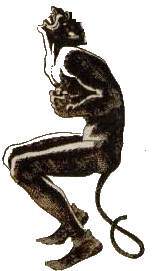